Are sanctions being applied consistently?

At about the same time, perhaps coincidentally, Roger Godsiff, MP for Birmingham Hall Green, sponsored a parliamentary Early Day Motion to reflect his concern that sanctions are being over-used by the Sparkhill job centre, one of two job centres situated in his constituency. It may be relevant that the other Hall Green job centre, Kings Heath, is the origin of the Caitt Reilly case, where the courts found that insufficient decision-relevant information had been provided to her and other claimants.

Given this, it seemed worthwhile to conduct a comparative numeric analysis of the newly published data for each of the relevant parliamentary constituencies comprising Birmingham & Solihull.  Eleven of these constituencies have job centres and hence are relevant to the study.

By matching the JSA sanction counts published by DWP with the JSA claimant counts published by ONS, the sanction rates for the eleven parliamentary constituencies were computed for the months Nov 2012 to June 2013. This is as much as the new DWP data series permits at the current time. October 2012 was excluded because it is an incomplete month.

The graphs below show the results of this study. 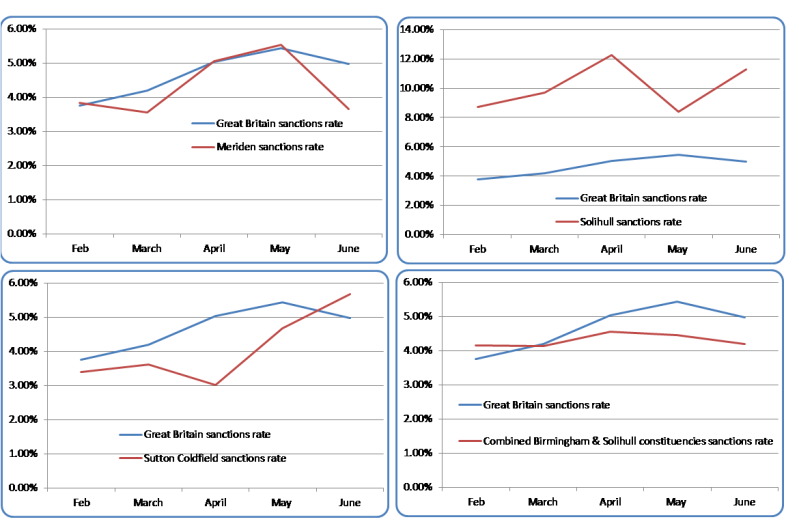 What do the graphs show?

With the exception of Selly Oak, the local sanction rates depart significantly from the national sanctions rate.

The local sanctions rate of Birmingham Hall Green and of Solihull appear to be particularly high for all of the five months Feb to June when compared to the national sanction rate. There may be valid reasons for this apparent over-sanctioning but to date a valid reason has not been identified. This has led to speculation that individual job centres are pursuing their own, or locally determined, sanctioning targets.

An alternative reason for the apparent over-sanctioning may be demographic. Younger claimants may attract sanctions more easily and frequently than older claimants. However, this is speculation. The age profiles of claimants in these two constituencies have not yet been ascertained still less compared to the national age profile of claimants.

The departures from the national sanction rate are statistically significant (ie more than 2 standard deviations away from the expected counts) for all constituencies, save for Selly Oak. 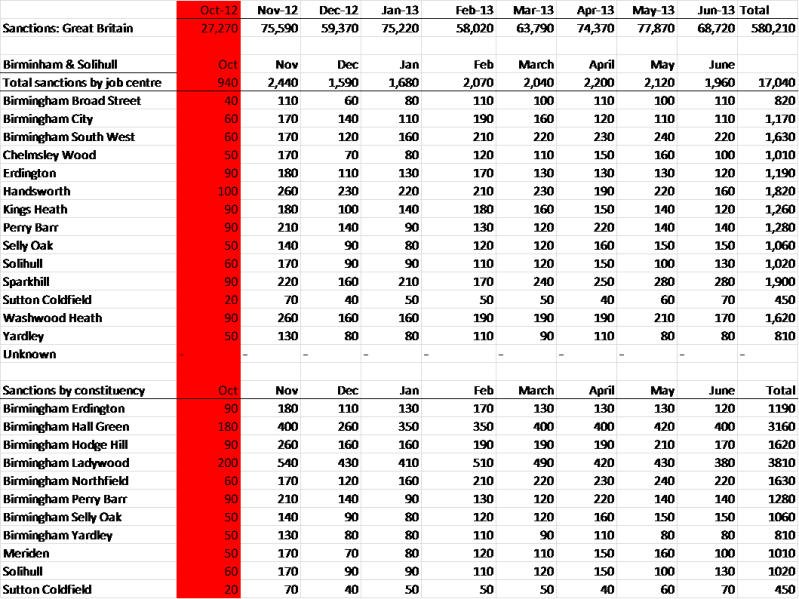