On December 2 2018, Jacob Rees-Mogg tweeted “The tax burden is too high”. His assertion derived from an analysis of historical data undertaken by the Taxpayers’ Alliance (TPA) which had been commissioned by the Sunday Telegraph. The TPA reported that the tax to GDP ratio had reached a new high of 34.6%, breaking the previous high of 34.3% seen in the early 1960s.

What does “too high” mean?

It seems reasonable to assume that “too high” in this context means that the tax level is impeding GDP growth; it’s not easy to think of a second reason for tax to be too high. This made me wonder whether there is an objective basis for asserting that tax is too high and prompted me to investigate whether a link between a nation’s GDP and its tax level exists.

I chose the year 2016 (for which complete data exists), and because it is recent, to examine whether a link exists. I used all 35 countries comprising the OECD (Lithuania was not then a member) to get a sampling frame of sufficient size and because these countries are considered to be developed. The UK is a member of the OECD.

To measure the affluence of a country, I used “GNI per capita” (at PPP) for 2016, also published by the World Bank. I classified each country’s affluence as “rich” if its GNI/capita was above the published OECD average and “poor” if the GNI/capita was below. The terms “rich” and “poor” to denote a county’s affluence have been assigned for convenience and are not intended to be literal.

I then set up a 2 x 2 contingency table and applied a Chi-squared test with one degree of freedom to test whether a significant link between tax level and affluence existed. I used Yates’ continuity correction  in calculating the test statistic as recommended by the literature. The contingency table is show below.

The Chi-squared test statistic, adjusted for Yates’ continuity correction, came to 0.00288.   This is well below the 5% significance level of 3.84 for a Chi-squared variable with one degree of freedom. A test statistic value of above 3.84 would be strong evidence that a nation’s tax level and national income are linked (one influences the other). Because the test statistic returned such a low value there is insufficient evidence to support a hypothesis that national income and a nation’s tax level are linked, at least for OECD members. In plain English, there is no discernible link between a nation’s level of taxation and its national income.

The claim made by Jacob Rees-Mogg and the Taxpayers’ Alliance that UK tax is too high does not stand up  when a cross sectional analysis is undertaken. A simple time series analysis on the UK’s “tax as a percentage of GDP”, as conducted by the TPA, is insufficient to conclude whether tax is either too high or too low. This is because the time series analysis says nothing about the consequences of tax levels on national income (or some other variable of interest).

Jacob Rees-Mogg is remunerated (rather well) by taxpayers. Many voters would say they deserve better than his shoddy, scantily-evidenced assertion.  It is also disappointing to discover that the study by the Taxpayers’ Alliance lacks sufficient rigour to support a meaningful conclusion. The TPA’s audiences should be wary – this example shows it does not seem to engage in research of sufficient depth to support its conclusions!  Is the TPA subordinating sound methodology to ideology  here? It seems so. Readers beware! 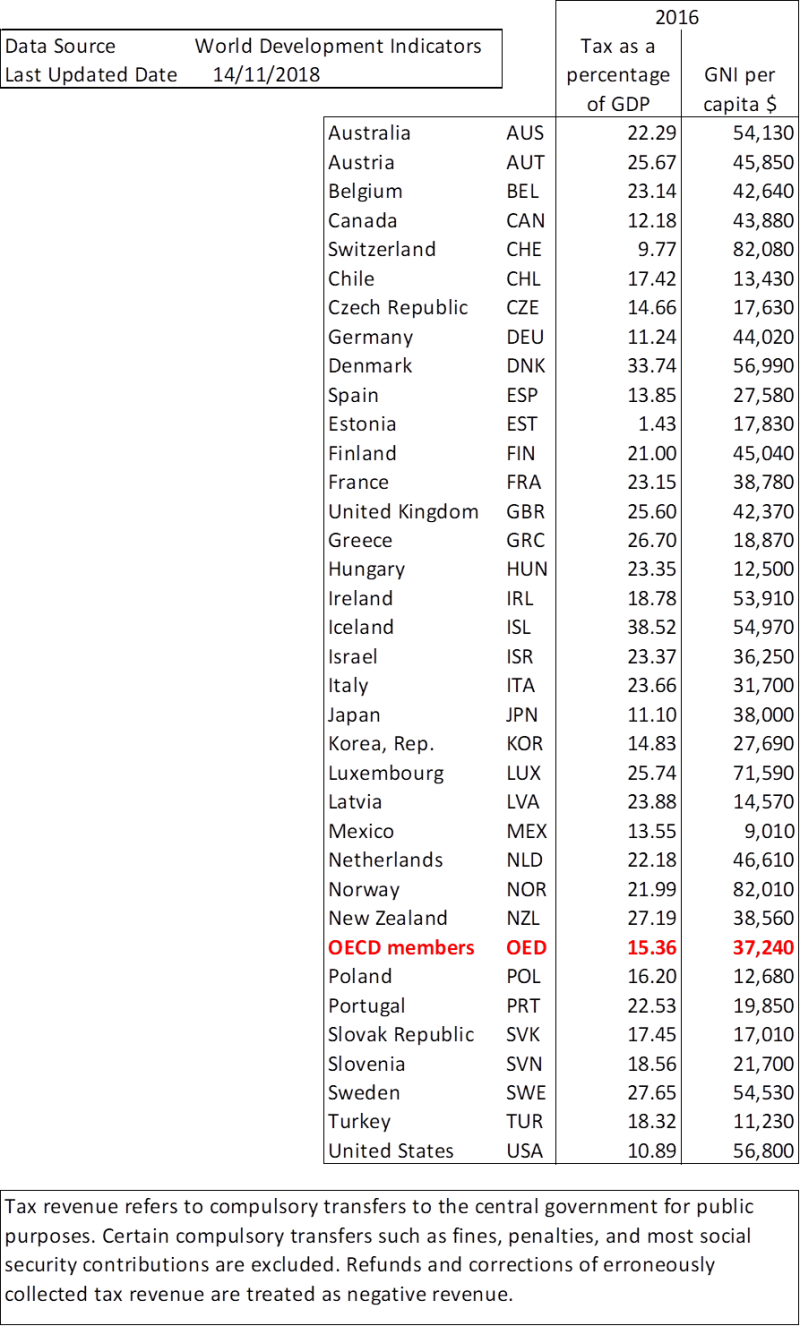 This entry was posted in Analysis, GDP, Taxation and tagged GDP, Tax. Bookmark the permalink.